Rinse and shine! Nah, scrap that.

It was nowhere near the time when the rays of the sun even begin to warm Tokyo. We slept less than 3 hours, and it was time for us to wake up. Try not to plan stuff like this if you’re planning to snuggle in your warm bed!

The alarm clock started ringing at 2:30am. Bleary-eyed, we dragged our limp bodies into the shower to refresh ourselves. What on earth did we get up so early for? The world-renowned Tsukiji Fish Market!

Visiting the official website, it may seem rather un-inviting from the way they phrase their words, which is exactly what they want to achieve!

.. Various problems have arisen in association with the increased number of tourists ..

Lucky for us, our research gave us a surprise in the form of Mr. Naoto Nakamura – a veteran of Tsukiji Fish Market who conducts private tours.

In a *cold* and drizzling morning, armed with our map indicating the rendezvous point, we set off for Tsukiji Fish Market. In a cab, of course. Get your hotel to call one for you. There was no other form of public transport at 3:30am in the morning, and I would like to add it burned a huge hole in my pocket for a 10-minutes ride. 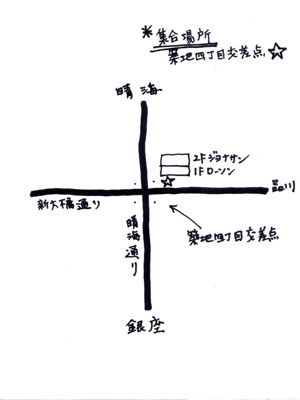 We hopped on the cab and showed the cab driver the map, for real! We arrived at the meeting point right on time, and standing beside the convenience store was our tour guide. Right away, we knew who each other was. I mean, who else would be crazy enough to be out in the open, shivering in the cold under the rain?

Exchanged our greetings, and we made our way to Tsukiji Fish Market on foot. There was no time to waste! Along the way, Naoto-san gave us little bits of information which helped us to understand and know more about the history of the fish market. Starting with the outer-market, he showed us the famous sushi places that we ought to try after we’re done with the tour.

Just a quick warning – for the faint-hearted and less adventurous folks, you do not want to join Naoto-san private tour. Despite being named “The Safer Tsukiji Tour”, it is exceedingly deceiving!

Before we knew it, we were crossing roads and zipping through little lanes, while a variety of machinery such as trucks and forklifts pass by us. We were careful to glance around every now and then to avoid the endless number of “turret trucks”, often carrying some form of seafood and sloshing water all around us.

The floor is perpetually wet, and we had to keep up with Naoto-san at times as he weaved his way throughout the entire Tsukiji Fish Market. I slipped once, and landed on my butt. A word of advice : Get good shoes! 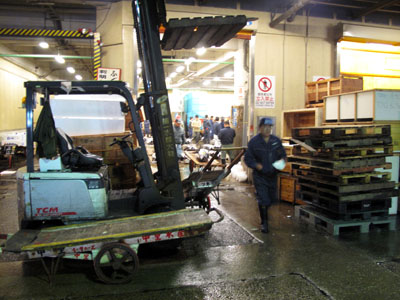 Typically, tourists would start arriving at 5:00am to get in line for the tuna auctions, which caters to only 120 pax per day. Often, guides would advise tourists to avoid the inner markets before 9:00am. And yes, this would indeed happen if you signed up for a typical Tsukiji tour that starts after the tuna auction.

Not for us! In the space of less than two hours, we roamed the inner markets (also known as the middlemen stores) – including the seafood wholesale area, and the fruit and vegetables wholesale area. There are all kinds of seafood! Humongous fishes, eels, crabs, shellfishes, etc. Naoto-san knew many of the stall-holders and in between explanations, he would stop frequently to make small talk with them. More than once, he pointed to us and explained that we were tourists from Singapore, which prompted the stall-owners to nod in approval. 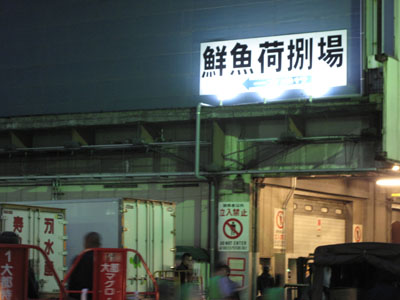 Prior to the main draw, which was the tuna auction, Naoto-san brought us all around the fish market. To be honest, I had absolutely no idea where we were headed most of the time. We strolled into dark passageways which led up, and down the stairs. More than once, we stopped and turned back when Naoto-san spotted Tsukiji Fish Market guards. It felt like an adventure of some sort to me, and we were playing a game of hide-and-seek!

We even went up to the roof-top to get a view of the entire fish market. 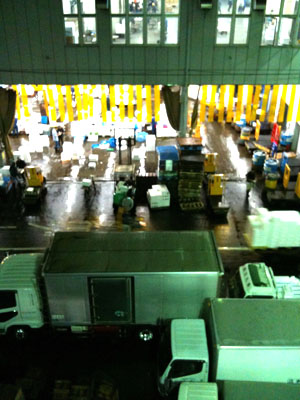 As the time approaches 6:00am, Naoto-san instructs us to head to Fish Information Center near the gate to register for the tuna auction. We got there in time for the second viewing of the tuna auction, phew! By then, we were already pretty hyped up after two hours of running around the fish market. For us, the tuna auction was to be the highlight, and last item for the morning. For the rest of the peoples waiting for the tuna auction to start, I guess their Tsukiji tour is just starting!

All of us had to put on a green vest, which indicated we were visitors there to observe the tuna auction. We were ushered into narrow strip of open area, and we were forbidden to cross into the tuna auction area.

All around us, frozen tunas were laid on the floor for the buyers to inspect. 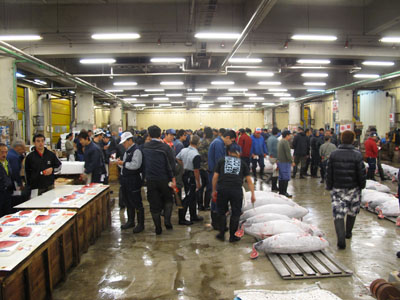 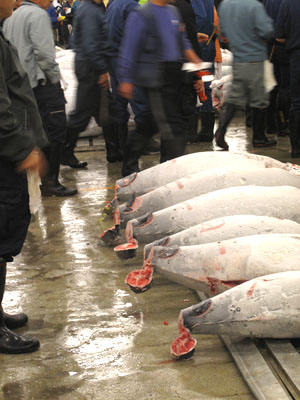 Besides those on the floor, there were also slabs of fish placed on tables. Without any explanation, we didn’t really know what those were for. 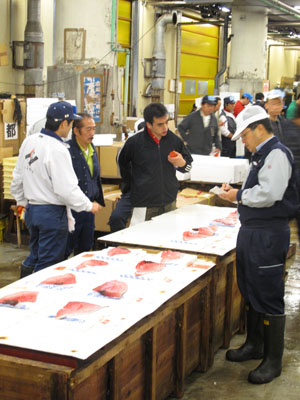 A sudden ringing of bells gathered everyone’s attention, as the auctioneer steps onto a wooden crate. 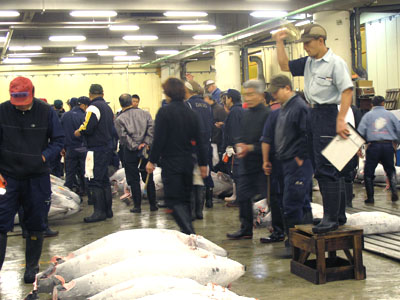 After a short while, he commences the auction of a batch of tuna. Almost immediately, he lapses into an almost trance-like state, his mouth and hands moving non-stop as he conducts the auction, which oddly enough sounded like an opera singer to me. 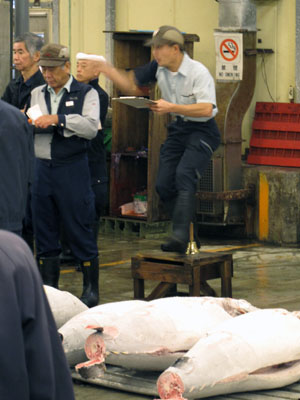 When all the tuna are auctioned away, the delivery guys would proceed to drive a hook into these frozen fishes and drag them away on the slippery floor. No wheels! With the auction over, we were ushered out and led to the Information Center to return our vests.

Based on directions given by Naoto-san, we figured out where Sushi Dawai was and made a beeline for it. The long queues are rather famous, but it seems like we’re early or something. The shop didn’t look that crowded eh? 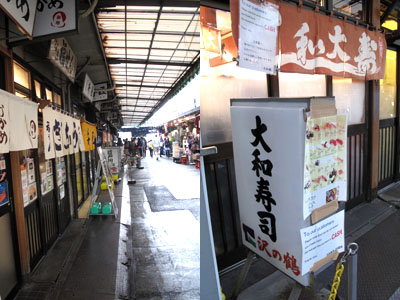 Perched on stools which faced the counter, we ordered the Omakase Set. As we patiently waited, pieces of sushi magically appeared in front of us as the elderly looking chef prepared them for us. 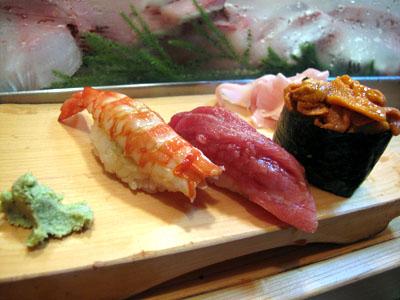 The wasabe was not needed at all, as the sushi chef has already placed an adequate amount in the sushi itself.

Without a doubt, it has to be one of the best sushi I’ve even had. Even looking at the pictures bring back lovely memories. As it turns out, our early morning ordeal was totally worth it! 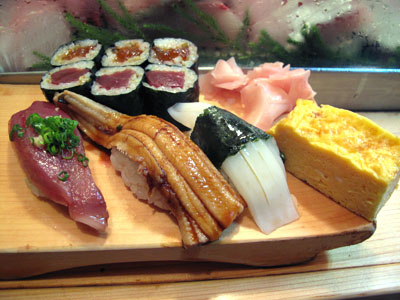 Our initial plan was to head over to Sensoji Temple after breakfast, but it was thrown out the window. Too tired to continue, we retreated back to the sanctuary of our hotel room for a blissful nap.

Waking up in the afternoon, we went over to Ginza for a little shopping – specifically at Burberry Blue Label store. It was a massive store, several levels high, devoted entirely to Burberry stuff, which could be a paradise or a nightmare depending on whom you’re talking to. *laughs*

No pictures of Ginza, but we did manage to shop for a few items. Constantly on the move, we filled our bellies with onigiri from convenience stores as we made our way to the Tokyo Tower. The iconic tower looked spectacular at night, lighted up and visible from miles away. 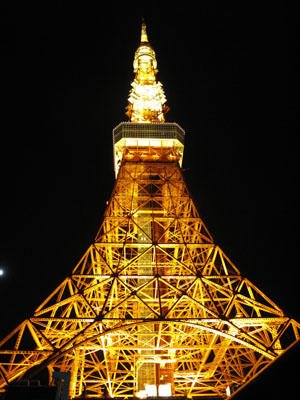 Ascending onto the viewing platform, the lovely night view of Tokyo took our breaths away. Like many of the couples there, we shared a romantic moment enjoying the scenery. If you’re interested, check out Tokyo Sky Tree which is expected to open in 2012 and replace Tokyo Tower as a broadcasting tower. 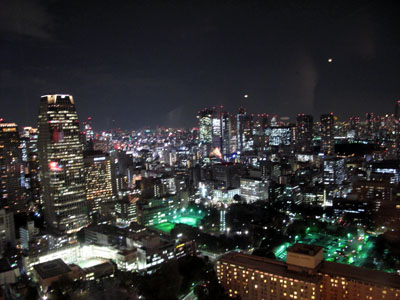 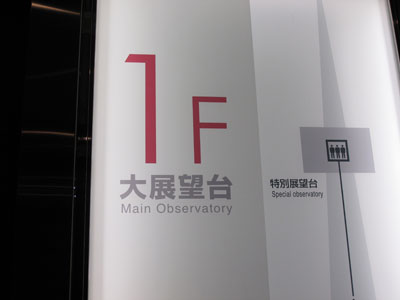 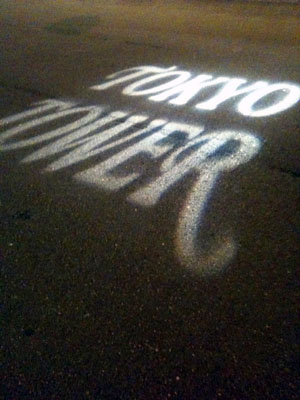 With an early morning flight to catch the following day, we returned to our hotel early – Hokkaido awaits us!