Having covered the essentials in my previous post, this time round we’ll take a look at some of the stuff I’ve not covered.

As Business Class travellers, our Qatar Airways boarding pass came with complimentary access to the Prada Lounge, one of three lounges at Bali Denpasar Airport. I grabbed these information off Bali Guide :

Out of curiosity, we asked what is the difference between the two. With a sheepish grin, he was almost embarrassed to reply : “This is better.” And so, we stepped in. Compared to the SATS Premier Lounge in Changi Airport Terminal 3, the food selection was better, despite the place looking a tad jaded. I shudder to think what the other two lounges would look like – try them out and let me know!

I’m sorry to say this but on the whole, the airport was kind of depressing, crowded and noisy. And so, we were glad to be able to rest a little before boarding.

We were seated in 3A/B on the return trip, which we felt were better than 6J/K as it was nearer to the front. The return trip was at 10:40pm – again we boarded early, at 9:55pm. Here is another shot of the cabin – 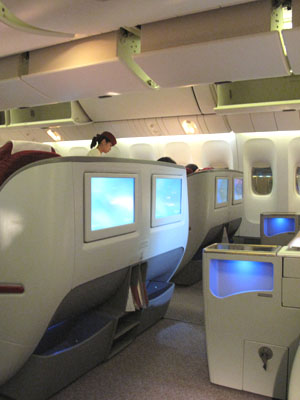 As we settled into our comfortable seat, we were offered a choice of newspapers, which included a decent selection of mainstream English papers. The stewardess took the opportunity to chat a little with us and asked where we were from. I enjoyed the Oryx entertainment system, which had a nice selection of movies. I managed to watch MI4 : Ghost Protocol and The Darkest Hour, both relatively recent movies released in 2011. 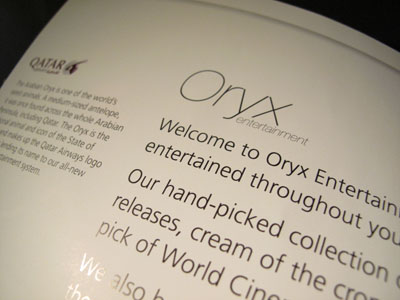 Likewise, a light meal is served on our return trip. 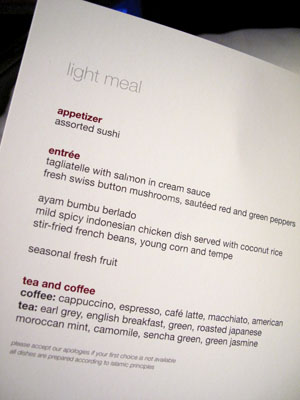 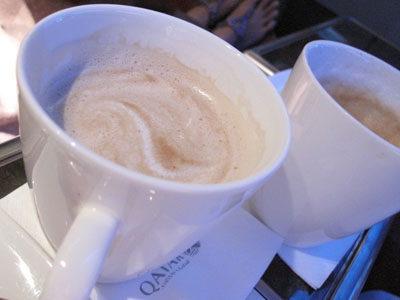 The hot beverage came with snacks to keep our mouths busy. Tasty! 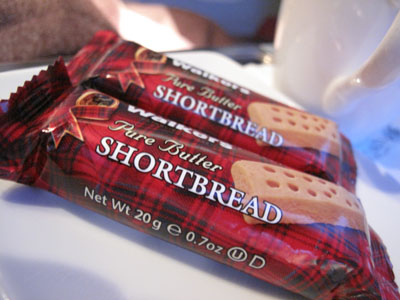 It was pretty dark, and I was trying my best not to disturb other people (some blissfully dozing away on their fully flat horizontal beds) when taking these photos, so you’ll have to pardon the poor lighting. This was the spicy Indonesian chicken with sushi. 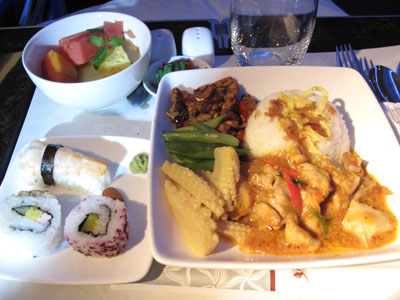 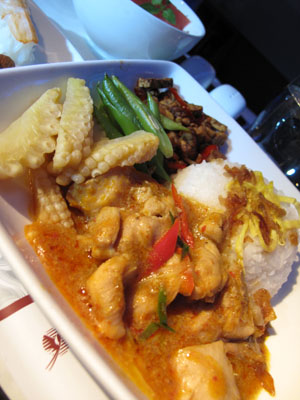 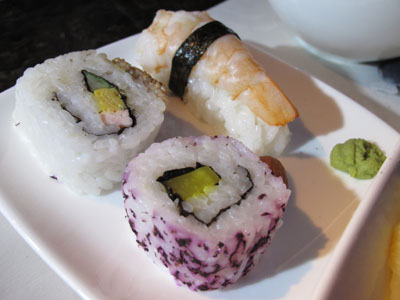 My wife chose the Tagliatelle (pasta) with salmon. 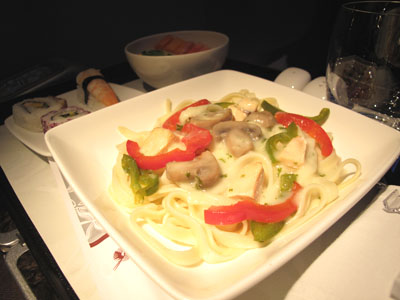 Contrary to some comments I’ve read previously regarding the flight attendants on the SIN-DPS route, I’ve found Qatar Airways’ service to be polite and prompt, with a generous dose of smiles. Mind you, this has nothing to do with how we were dressed – I was in a polo tee, shorts and loafers. We’re headed to Bali after all, and we see no need to “dress up”. If you’re wondering, there is no dress code in Business Class. T-shirt, shorts and slippers will get you on the flight just fine.

Every request we had was promptly attended to, and done correctly. More wine? More coffee? More peanuts? Blankets? All we had to do is ask. (unlike SQ, seems like blankets on Qatar Airways are not given to passengers by default)

One thing I noticed was that the flight attendants in Business Class were extremely generous with the wine and champagne. Every so often, I would spot them roaming the aisle, eager to refill any empty glasses. One passenger literally had to cover his glass to stop them from pouring more wine! His expression? Priceless.

On longer routes, they seem to give out Molton Brown amenities kits. No such luxury on a 2-hour plus flight. The restroom looked very similar to the ones in SQ, but Molton Brown products like hand lotion are available. Help yourselves to the shaving kits and toothbrushes as there are a number of them in each restroom. 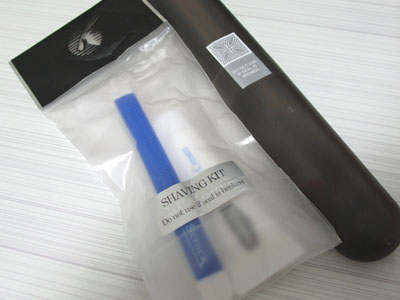