Today was no different from yesterday in terms of weather in Taipei. It drizzled and rained throughout the day, but luckily for us, our itinerary for today is mostly restricted to indoor activities. Why so? Because today is the first of three “Jay Chou The Era 2010 World Tour” (周杰伦超时代演唱会) concerts to be held at Taipei Arena (台北小巨蛋), and one of two main goals for this Taiwan trip is to attend the concert!

It was an early day for us, waking up at 8am to prepare to go to Taipei Arena. Why so early, when the concert only starts at 7:30pm and the merchandise sale at 12pm? Blame it on the Singaporean kiasu mentality, which means we are scared of losing out. Because many of the official merchandise on sale are limited in quantity, we decided to make an early trip to Taipei Arena, which turned out to be a blessing in disguise.

We left Rainbow Hotel at 9am, got on a cab, and reached Taipei Area by 9:30am. As it is our first time there, we roamed around the exterior of the building, looking for the merchandise tent located outside Starbucks. It wasn’t long before we spotted the outdoor tent, with probably twenty to thirty people already in the queue. 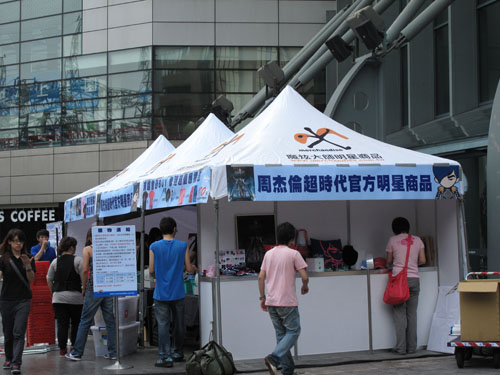 We joined the queue, only to be directed by Taipei Arena’s security personnel soon after to queue outside McDonald’s instead to avoid blocking the entrance/exit. 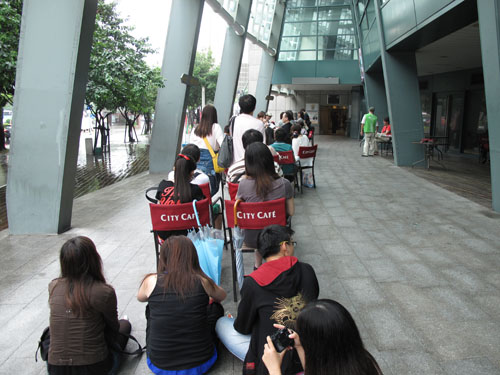 Armed with two onigiri, two bottles of water and a couple of tabloid magazines we bought from 7-11, we waited for 12pm to approach. As it approaches 12pm, the queue has increased in length and the crowd has grown restless.

Without warning, the crowd became alive! People grabbed their stuff and stood up. Some walked, others jogged and a few ran. Apparently, someone had scouted the outdoor tent area and another separate queue had formed in the initial area we were queuing at.

There was a couple of tense minutes as people in the ‘old’ queue debated with the organizer of the merchandise sale, as we had gotten here first and from what I overheard, some started queuing as early as before 9am. Eventually, someone confirmed our version of the story and it was decided that the ‘new’ queue would form up behind us instead. Thus, we were back to the original site of the queue.

Even though it was already approaching 12pm, there was no sign of the sale starting as the crew continued to set up the sale counters and un-boxed the merchandise. Order forms were available for fans to fill up to facilitate payment.

Fans began to fill up the form carefully, indicating what items and in what quantity they wanted to buy. Double and triple checking their orders to ensure absolutely nothing is missed. Fans were going back and forth to the booth showcasing the sample items, deciding whether to get that lovely Jay Chou key-chain or the limited edition Jay Chou figurines. With every passing minute, the queue increases in length. The drizzle came and went, but nothing could dampen the enthusiasm of these hardcore fans. We even spotted fans from Thailand who were in front of us! 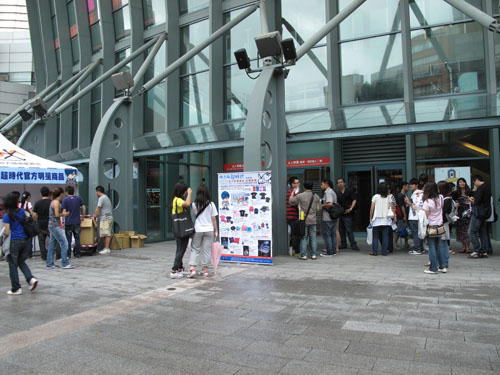 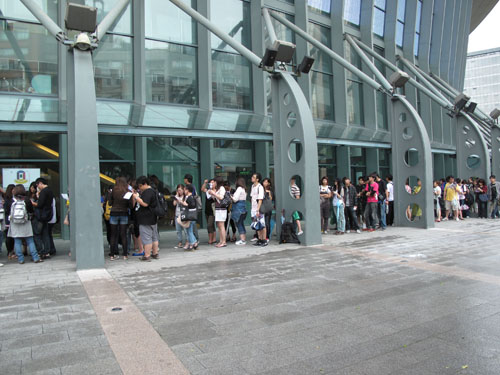 Finally, they signaled to us to approach the sale counters, but there was another round of waiting and the crew got ready and wore the official Jay Chou t-shirts. And then, it began. 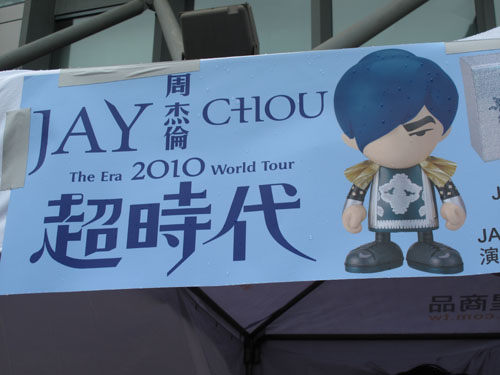 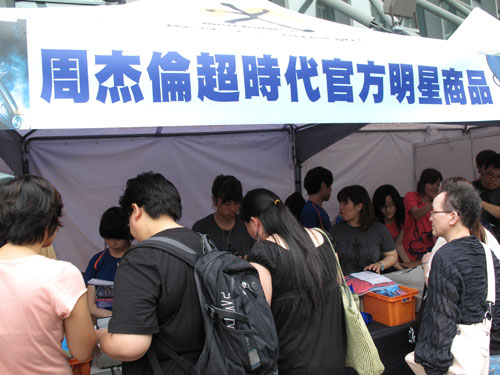 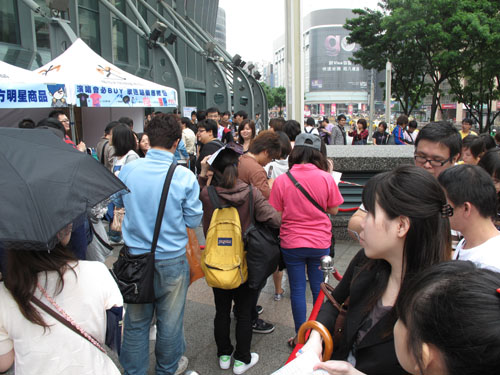 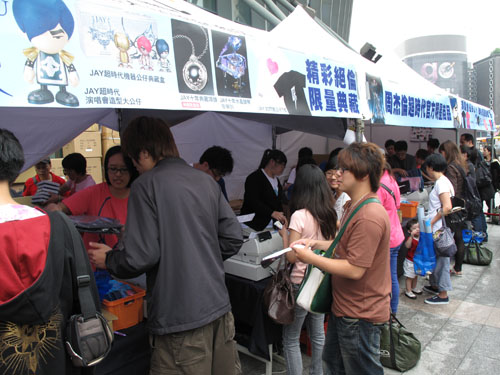 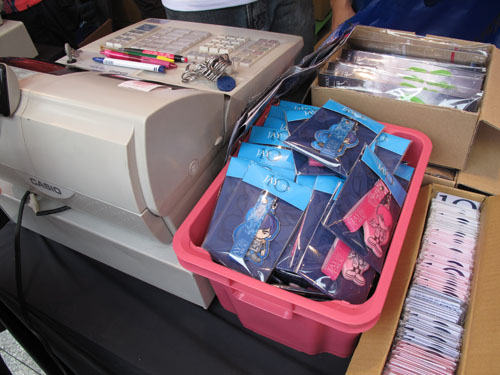 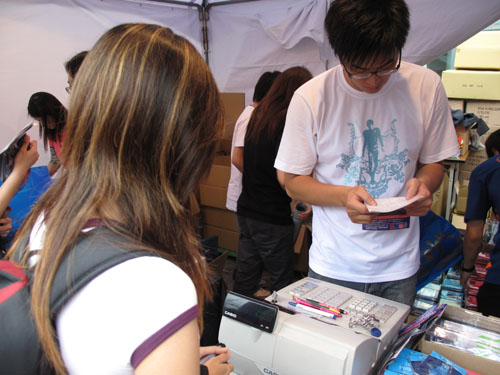 We finally got the merchandise we wanted! Carried the shopping bags over to the side of the tent, went through the merchandise and realized they had forgotten to give to us some items. Shan’s order must have been too massive! Re-collected the missed-out items and we’re good to go. Phew! Even after we’ve bought what we wanted, the queue continued all the way to the side of the road. 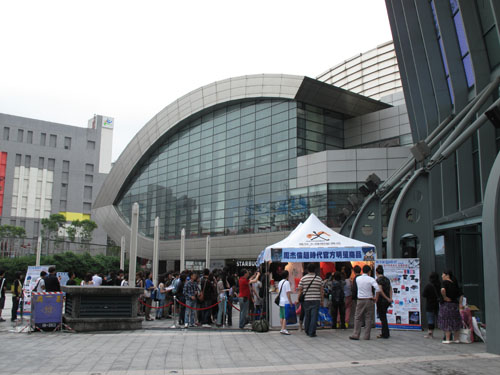 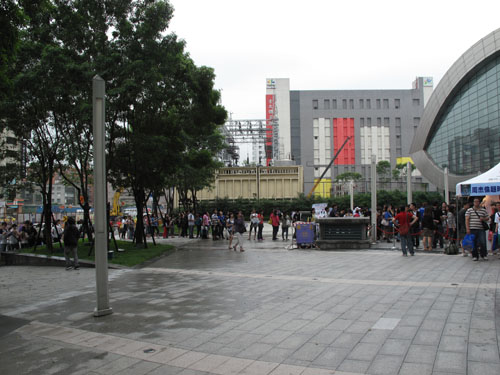 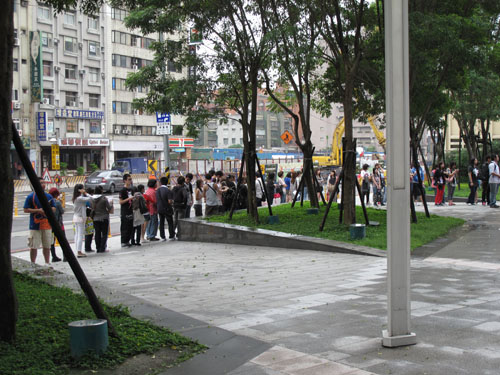 In case you’re wondering, I’m not a fan of Jay Chou. But then, no one said you had to be a fan in order to enjoy the process eh? Hanging on to all the Jay Chou bags, we made our way back to Rainbow Hotel for a much needed rest. 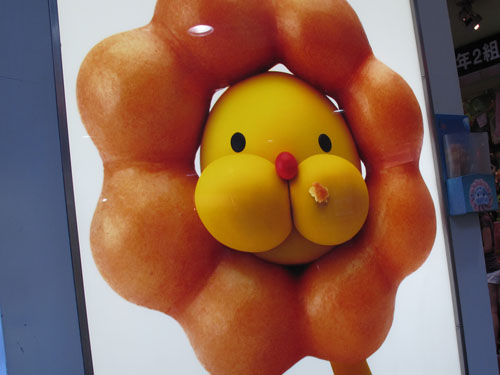 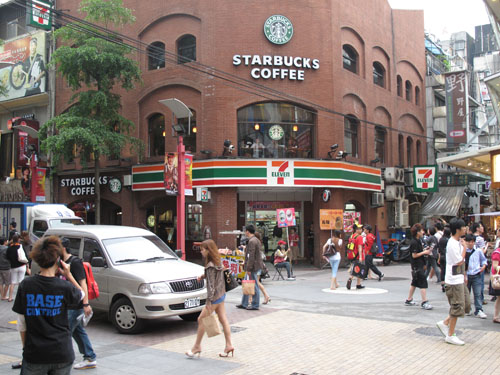 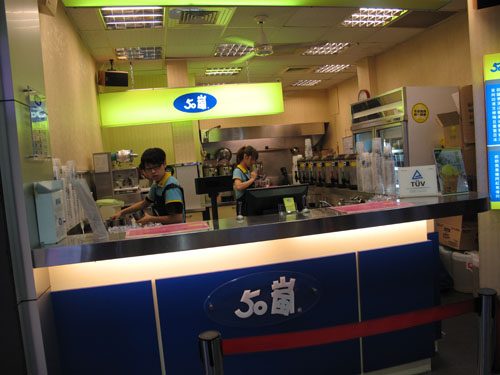 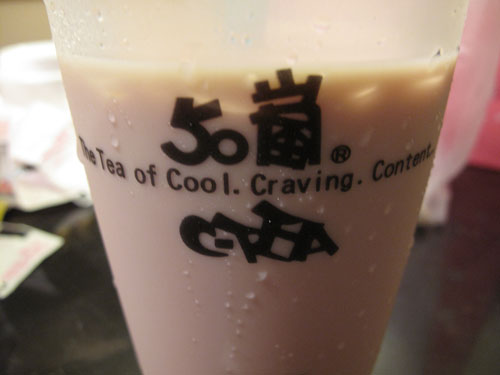 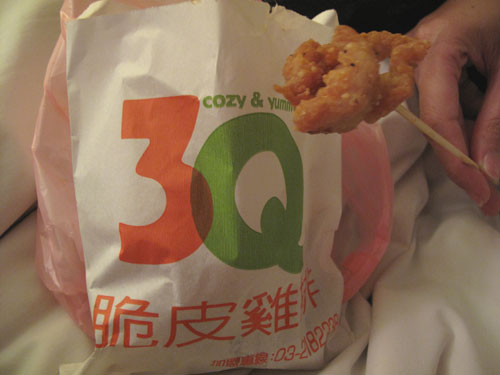 Before we know it, it is approaching 5pm – time to make our way to Taipei Arena again for the concert! Alighting from the cab by the side of the road, the sight of queues greeted us again. People are already queuing up, ready to enter into Taipei Arena. Also, there are countless stalls set up, selling a wide array of concert must-haves such as light-sticks, LED-sticks, placards etc. The main colour theme is pink, as you can see from the picture below. 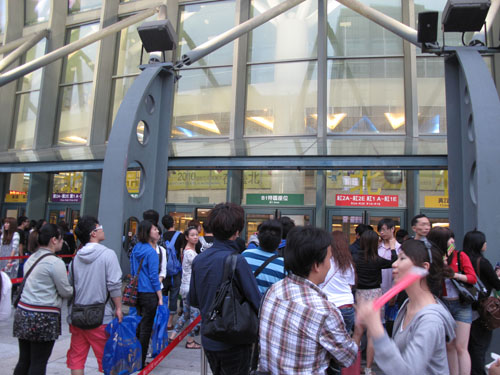 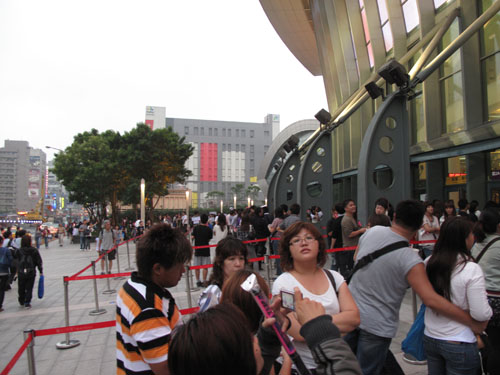 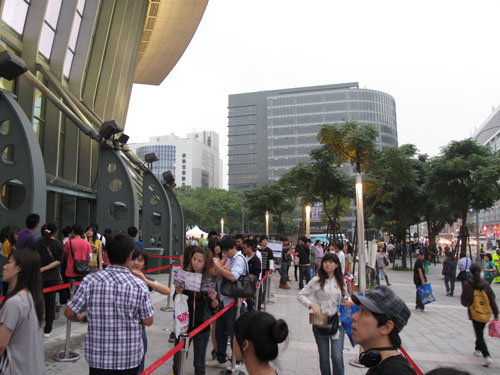 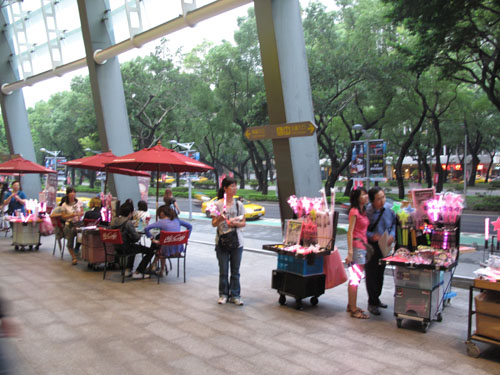 Each seating area had its designated queue, and our queue was rather short? Sprite was giving away balloon-sticks, which we took for a little photo taking fun. 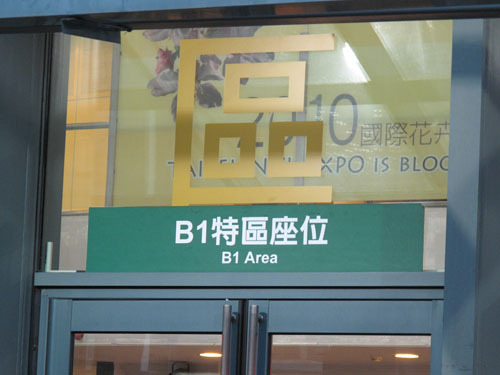 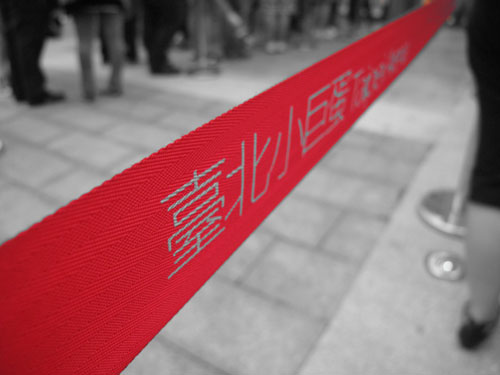 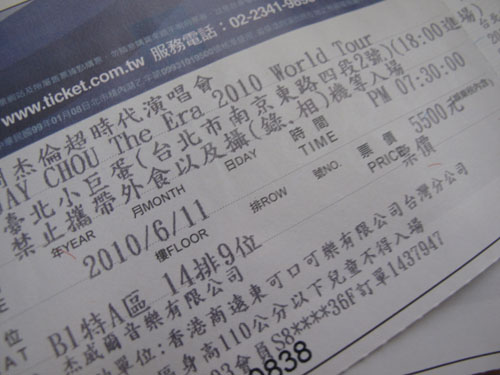 The door opens, and fans enters the arena excitedly. Our tickets are pretty good, and from the protruding front of the stage, I guess we would be situated less than 10-metres from Jay? Taipei Arena isn’t really that different compared to Singapore’s Indoor Stadium, just that the capacity is probably much, much more. The concert hall fills up slowly, and before we know it, the concert has begun! 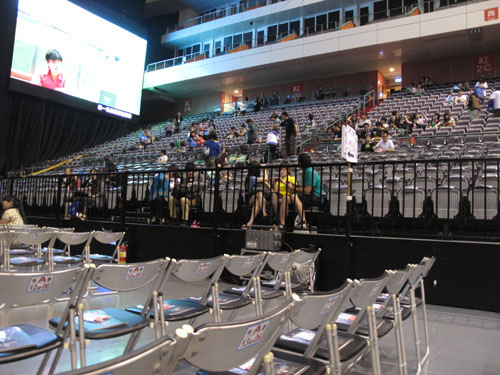 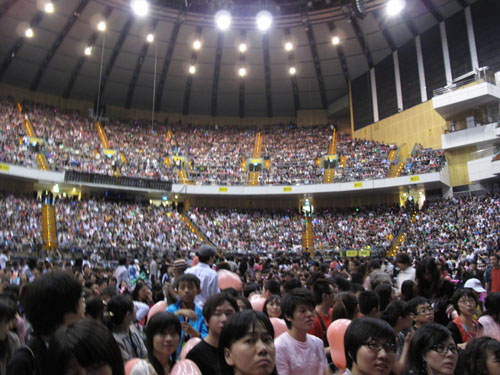 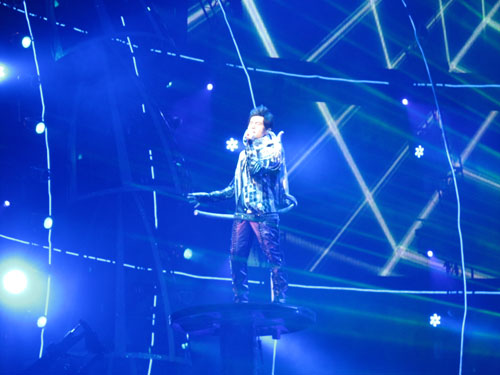 Oh well, not many pictures from here onwards, but added a video clip for your viewing pleasure =p The hat that’s bobbing up and down at the bottom of the video belong to an auntie (we speculated she might be Japanese) who is probably more high than myself! That just shows you the level of appeal that Jay has across all age groups!

Overall, I can only say that Taipei Arena offers the ultimate concert experience. Having been to Jay’s concert at Singapore Indoor Stadium in 2008, this is probably ten times better! In terms of both audio and visual entertainment, it was fantastic and I think it is impossible to recreate the same experience in Singapore, given the restrictions.

The concert lasted 2.5 hours and ended slightly early at 10:15pm, as we thought it would end closer to 11pm. Another cab ride took us back to Ximending for supper – 鼎茶 vanilla ice-cream cocoa shake, deep fried 杏鲍菇, 深海鱿鱼 and 糯米肠. Sinful, but extremely satisfying.